A lot of have been asking why no named Bartlett rods are know to exist.
From a Bartlett 1878 catalog (not Montague yet) I found two named
Lancewood rods listed. #1 Gudgeon Mountain Trout Rod with ash butt and Lancewood tip.
#2 California Rod. This rod had a hollow Lancewood butt with a spear tip inside. All the rest are listed by numbers. Something to look for.
There are 8 different bamboo rods listed with 3 each sizes. Light, medium, and heavy. The balance of the catalog are 40 listings of Lancewood, Ash, and Greenhart in light, medium, and heavy.
So, 120 wood rods and 24 Bamboo.
Moving up to the war 1940, Montague had a 5 year supply of Tonkin Cane from China in their warehouse. When the war ended they still had a years supply of stock to get started again. With over 200 employees they were a step ahead of everyone else.
As you have all read, Joseph Ward had a daughter named Jane Amanda.
She married Eugene Bartlett. That said, in my collection I have an early
Montague rod with Cherry wood reel seat and the name J.A. Bartlett inked on the shaft. Just a thought.... And it's round bamboo.
I lived one town over from Pelham and Amherst and spent some time there
looking into the history.
Top

I'm sure most of you have seen this, but here's the Montague City Rod Co. factory in Pelham. Getting bored here. 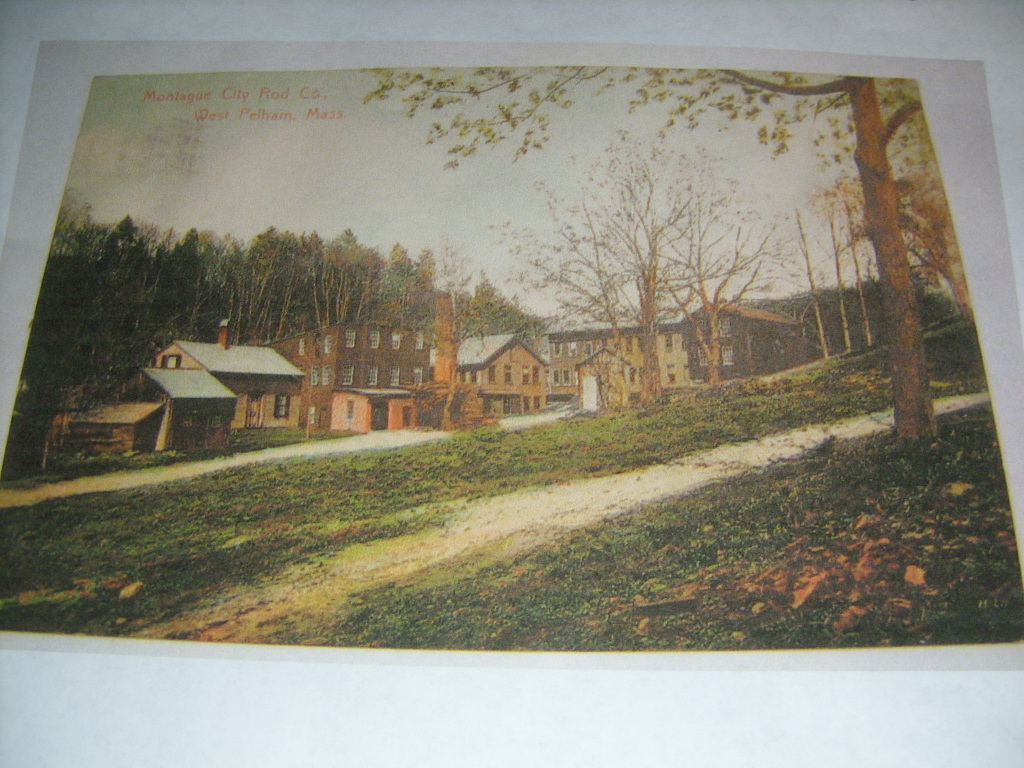 A reminder that when the 1878 Bartlett catalog appeared the brothers were still working together in Pelham. Leander, the rod designer, left in '82.

What two years after that was "M.C. Rod Company" named used? The factory in Montague City was established by Leander and his partners in '86. Immediately after that? Autio's Horace Gray monograph has name change in '89 - or a three year period.

Suspect the "J.A. Bartlett" rod was made in Pelham.
Top

jeffkn1 wrote:Dustnstuff has provided us with photos of one of the scarce M.C. Rod Company stamps. I'll let him add particulars. Someone will need refresh my memory regarding what years they used that stamp. That will help date this reel seat which found its way on to a good number of trade rods, one being the later Isaak Waltons.

Thanks to Jeff and Peter for the pictures of a much higher grade rod than anything TEJJR has posted and maybe he will look at these pictures and compare them to the supposed high grade rod in his AMFF article and he will actually see the difference in quality. Still waiting for answers to the questions I have asked TEJJR which I believe he can not give an answer for like "Locally produced cane" still the biggest flyer in this thread.
Top

Attached photo is reportedly from Life Magazine around 1980

Standing to the right with glasses is Eugene Bartlett
Standing on the left in white jacket I think, is Curt Knight
Extreme right Francis (Babe) Jones, a friend of Bartlett
Ted Lambert center with pipe, others are not known

Don't know about others but when I assess the quality of a classic rod I consider when it was crafted and compare with others of that period. Obviously the beautiful rod in the photos came later than The Bartlett Rod. Any idea on a date range for it?

If anyone is ever in the Pioneer Valley I'm happy to take them the vast bamboo forests in the Pelham Hills... Actually, I was clearly referring to the cane present post-war when it was tough if not impossible to import. I have not been able to confirm yet but still would not be surprised if some of this local stock made its way to AFRC. Family bonds can work that way, in spite of business considerations.

Speaking of bamboo, don't suppose anyone is aware of makers using rod cane other than "Tonkin" from China. This species, Pseudosusa Amabilis, is what we all are accustomed to, but actually there is another new world bamboo which may be better. In comparison tests it, Guadua Augustifolia, is strongest bamboo genera known. Wonder if any makers have experimented with it...
Top

Moso, Argentinian cane, Phyllostachys Nigra Bora - Black Bamboo, Phyllostachys bambusoides - Giant Timber, Madake and Phyllostachys Meyori and Snakeskin bamboo, a member of the Phylostachys Family (I.E. timber bamboo) more than a few others have also been tried and every time a maker attempts a rod with American grown cane they do not match up in any way. Makers have been trying alternative cane for a century or more and oddly enough we continually fall back to Tonkin.

I think MR Jr should build a few rods and then he would have a little better grounding on the making of Bamboo rods and he should listen to people with experience and not just conjecture, I have tried 4 of the above species and none compare real favorably with the Tonkin and that is hands on experience

Yes we have tried alternatives to Tonkin and we constantly come back to "CHINESE grown" Tonkin, the others just do not match up to the "Lovely Reed" that is Ammablis.

Fact is I would challenge TEJJR to make a rod out of the Guadua Augustifolia you would in short order understand why rods are made from Tonkin and not the Guadua,(and then you would be speaking from experience and not just conjecturing about a subject) just look at the nodal placement of that species compared to Tonkin,

You would quickly understand that nodes suck and the Guadua would be a horrible exercise in node straightening. that cane might have 10" internodal distance compared to good Tonkin which is twice that distance or more. You would call them heavily noded rods for sure, just go look at pictures of the stuff and see how close those nodes are, I do not know any makers who would attempt that material purely because its nodes are way too close and straightening and flattening would be a bloody nightmare. Compare the two and which would you make rods from as far as an internodal distance is considered??? Simple answer is Tonkin period!!! 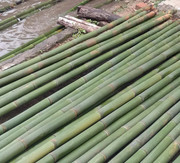 Attached photo is reportedly from Life Magazine around 1980

Standing to the right with glasses is Eugene Bartlett
Standing on the left in white jacket I think, is Curt Knight
Extreme right Francis (Babe) Jones, a friend of Bartlett
Ted Lambert center with pipe, others are not known

I've been advised that the subjects in the photo are misidentified; they are known to be from the Montague factory but their names are unknown.
Top
Post Reply
188 posts