Has a pictoral comparision of rods tube by maker ever been considered here. Did a search of course and found nothing. Maybe some folks here with all the marked/ known examples could post some side by side photos with maker id. So many rods get moved around.
Thanks.
Here 3 marked that I have
Tops, T to B
Peerless, Winchester, Heddon 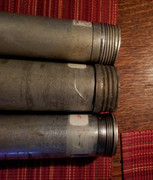 I'm susprised at the decided lack of enthusiasm here!
Is it the subject or my own infamy? Seems to me an interesting and useful endeavor.
What up?
Top

It’s useful and I will add some tonight if I get time. I think you hit the most common marked tubes with your three. It may also be interesting to add unmarked tubes with discussion about what eras and makers used them.
Top

Just figure folks have more distractions on Monday nights. Maybe it's the playoffs. If it's any solace, I posed the same question over ten years ago and the silence was deafening. I deleted my post the next day for lack of response.
Rod tube ID gets difficult without labeled examples and/or catalogs for documentation once you go back much further than WW II. I agree that it would be useful to have a reference, though for some of us the same reference for formcases and canvas bags would have greater value because so many early ones were unlabeled. Without distinguishable fabric or sewing pattern, a tan bag is a tan bag to most of us.
Top

I know of nine different tubes that Heddon used for their bamboo rods from 1909 to 1956. I now wish I had photographed and cataloged them all.
Mark
Top

It’s moments like these that keep me coming back
Top

Sorry, Steve, you'll have to do better than that.
Top

Here are three tubes that came with Cross rods made in Lynne, Mass. They are unmarked but I believe they are original and unique to this company/era. Brass cap slides on. 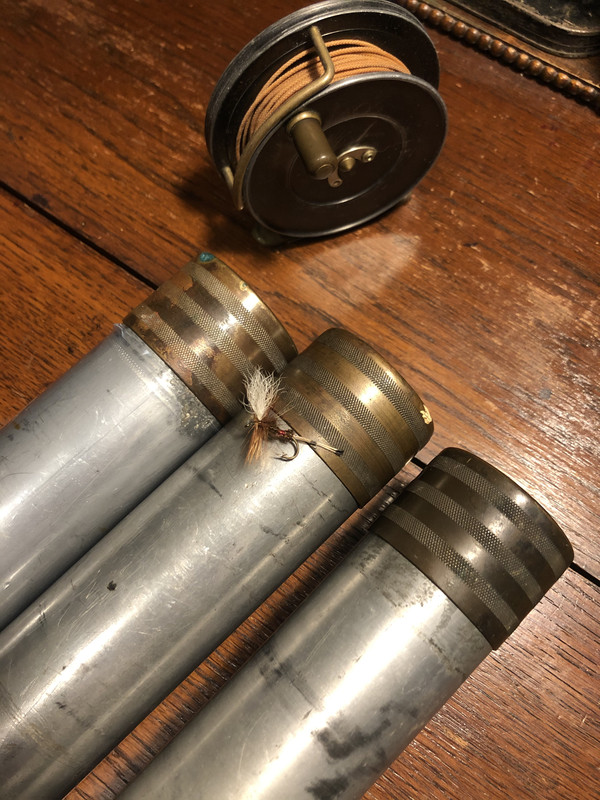 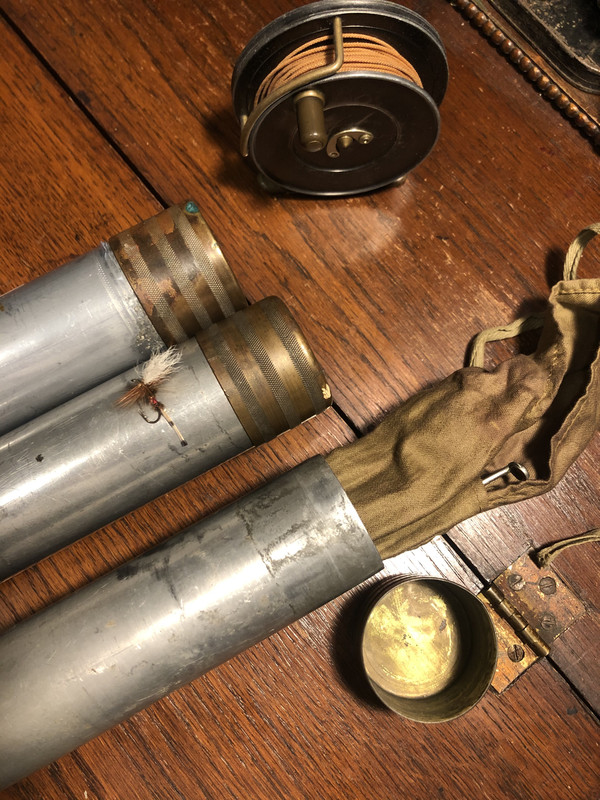 The best known of the handmade tubes used by the Paul H. Young Co. was built using post-World War II war surplus aircraft aluminum conduit originally intended for construction of a B-24 bomber at Ford's Willow Run factory (see "How Ford's Willow Run Assembly Plant Helped Win World War II"). After the war some rod makers, including Uslan, Dickerson, and Young, bought up surplus bomber conduit to make fly rod tubes. You can see the characteristic thickened collar at the capped opening. A potential problem is often found at the other end of the tube. Four out of five times, the bottom end turns out to be nothing more than a wooden disc hammered into place. This is not very protective of the rod in fishing or storage situations, as water can seep in. To fix this problem without altering the tube, I buy rubber chair leg caps for tubular furniture, 1-1/2" diameter, in an inexpensive two-pack. Fit the rubber cap over the end of the tube, and the rod in the tube will be much better protected. This is a 9'0", 5-weight Nymph Rod rod built by PHY in June 1949 for his best friend, Paul Cardell of Birmingham, Michigan. PHY used a variety of rod bags over the years. As shown here, he sometimes wrote rod information on fabric bags that were made with a tight weave. A line of PHY's inked writing on this rod is shown in the signature space below.

Rod tubes, in and of themselves, can indeed be a very interesting side light to bamboo rod collectors. The many styles of tubes used over the years for Goodwin Granger and Wright & McGill Granger rods are a good example.

Fortunately in that case, the Granger tubes have been profiled in some detail by Michael Sinclair in his wonderful book, "Goodwin Granger--The Rod Man from Denver". The photos of the tubes and tube labels are very informative, so I'll not try to duplicate Michael's efforts here.

Lastly, I have enjoyed finding and purchasing "orphan" rod tubes--sans rods--and re-uniting them with their correct rods. Over the years I have been able to accomplish this almost 20 times which is yet another satisfying aspect of our hobby.

"An undisturbed river is as perfect as we will ever know, every refractive slide of cold water a glimpse of eternity" - Thomas McGuane
Top

Here are a few Heddon tubes. 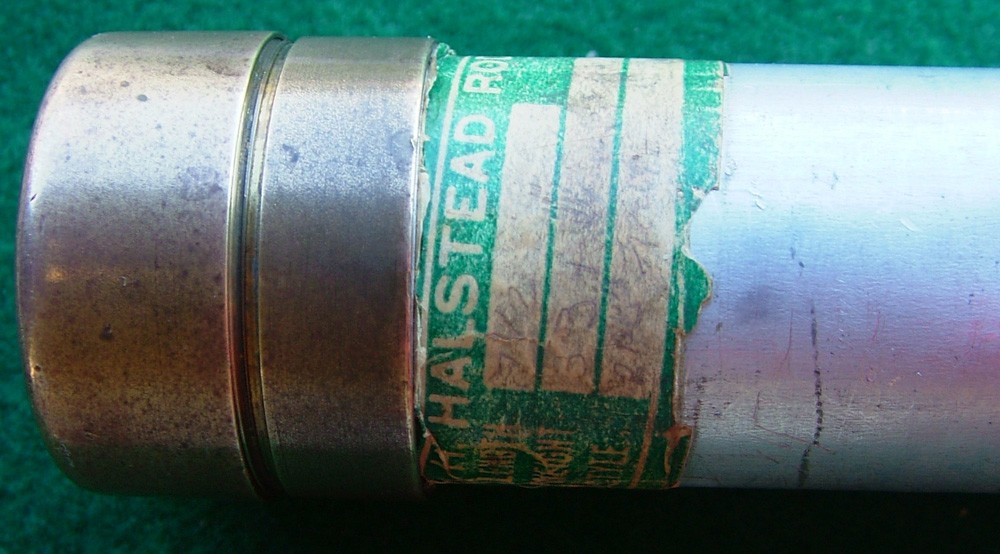 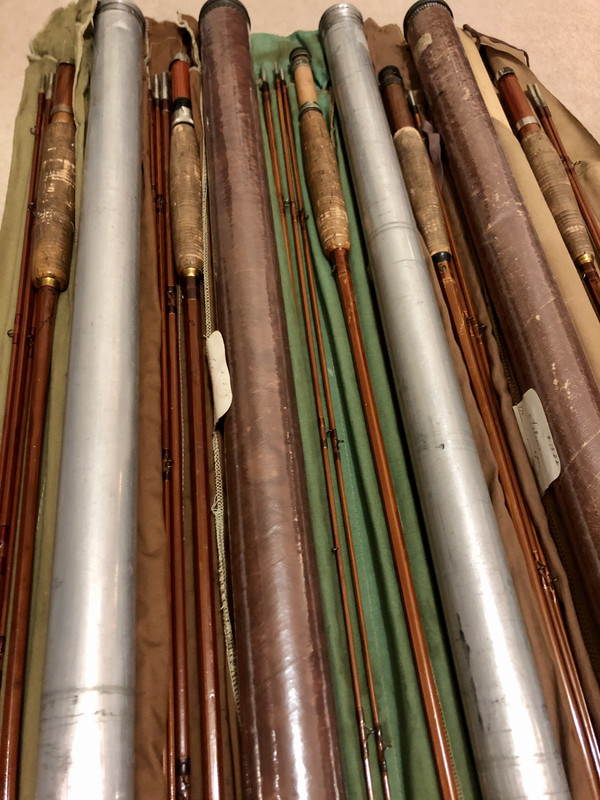 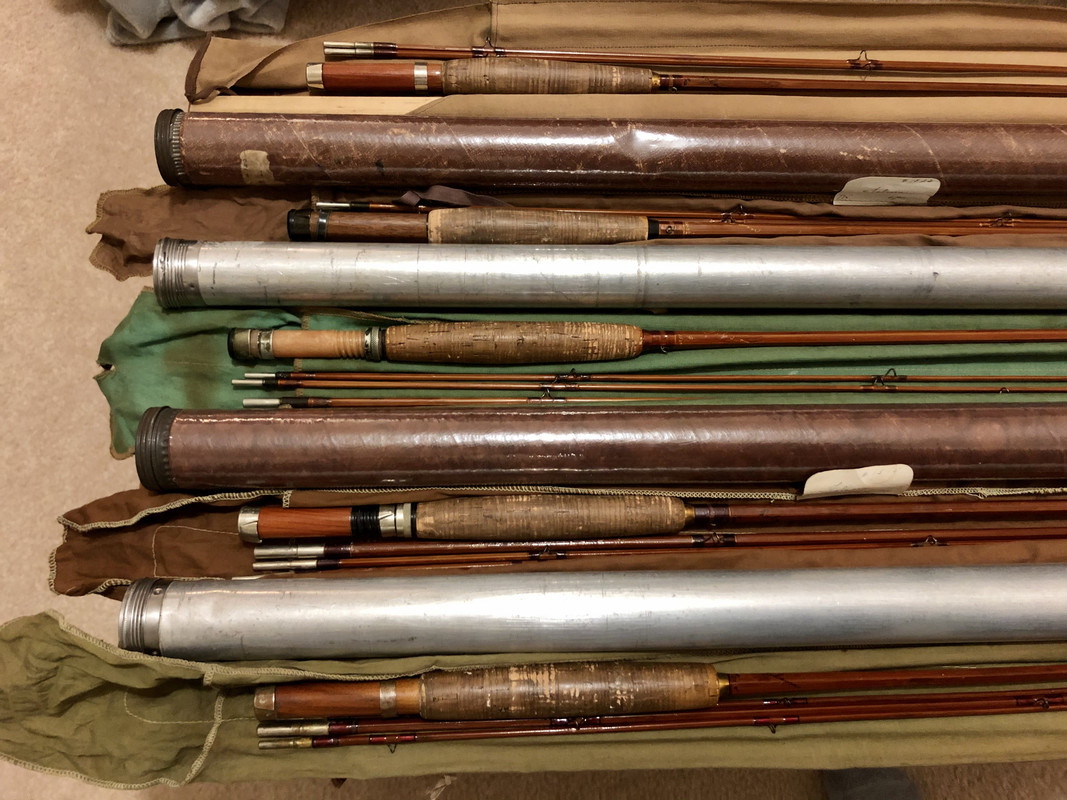