Discuss various makers rods here, i.e. if the maker is not listed under its own forum please feel free to discuss them here vintage or current. I would like to keep the makers listed by an individual read-only forum so it will be easier for those interested in those makers to find specific information about the rods and the makers. If anyone has any original catalogs they could scan and pass along to me I would be pleased to use them to give a history of the maker and their models in a forum, thanks.

We've had several discussion points around the world fairs, let's keep it going on a new thread!
I'll post some information I have on the Chicago World Fair of 1893 in the next day or two.
Top

Participation by tackle makers varied from expo to expo. Here is the award list from the 1876 Centennial Exposition. Officially, tackle in this list is known as "Group V Fish and fish products - apparatus of fishing". There were three judges for Group V, two foreign and one American, T.B.Ferguson. Exhibits were assigned numbers, not shown in this reference. Judges submitted (very) brief reports to the Award Committee. The Expo ended in October and awards were mailed out to recipients the following summer (1877). Each bronze award medallion was accompanied by a certificate. The medallions were 3" in diameter and weighed 10 ounces. 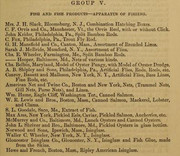 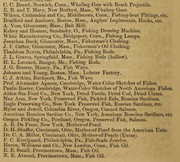 The Library of Congress is the source for this information.
Top

The Centennial was well documented from a number of angles with both standard photographs and stereoviews, which you'll find through Google. The upside is that they're all black & white, so contrast is usually good. The downside is that, so far as I've been able to determine, there are no photographs of small items such as rods, reels, or flies. You will not see photos of Orvis' reel, or Krider's rods, or Sarah McBride's flies, for example. The photographers went for wide views, for single large items like the Corliss engine, cabinet displays, individual artistic pieces, and product display stands. This photo of objects on display by the US Fish Commission shows about as much fishing as I've been able to locate in the Centennial. This series of stereoviews was a big seller and many are listed every day at ebay.

(Remember to click on each photo to see it full size)
As mentioned above, the judge for most (all?) of the US exhibitors was TB Ferguson. Here is a list of the exhibit numbers for which he entered reports. The numbers match the report numbers.

There were several outfitters, Shipley, Bradford & Anthony, and CB&M, who displayed broad ranges of tackle. The rule was that an exhibitor of a manufactured item could not receive an award for something unless he made it. Rules also allowed for special awards, with judges to file a report explaining the reason. Here are the three

Being the first outfitter to place orders for the new split bamboo rods from Wheeler and Leonard, Bradford & Anthony may have exhibited rods from each. They may also have shown rods from the Bartletts as well. Other Centennial reports have indicated that many wood rods were on display, as well as which of the three displayed them, but never stated which factory they originated from. Wheeler and Leonard chose to enter their own displays and received awards that way.

They were not the only rod makers

I suspect that, the event being held in Philly, there might have been a slight bias toward local boys. Compare the language between these and other makers.

Two individual fly tyers were awarded. Information on McBride is tough to dig up. Shields is well known and coincidentally his Centennial award certificate, as well as displays of his work, will be viewed by our group at Tim Pond this year, courtesy of Jerry Girard and Dr. Bill Krohn. Jerry's items came from the November auction at Lang's.

Only one reel maker, an important one, was there

This last one is of particular interest to me for several reasons. The Musconetcong River flows through Bloomsbury, NJ and is familiar to me in some stretches. It has some limestone areas and good springs that feed the river and a commercial hatchery was built over one of them. Forty-nine years ago, friends and I bought trout there to play a little bucket biology, stocking trout in Cold Brook, a small brook located in Oldwick, NJ and flowing through mostly posted land. One of the hatchery owners explained to us that the original hatchery was one of the earliest in the state. It was favored for its constant 50 degree water, just right for optimal propagation. Also noteworthy is that Samuel Phillippe is said to have fished the "Musky" in the Bloomsbury area. I'll have to see if there is any connection between the boxes and the hatchery.

Most of the remaining awards were for either fish or fish products, or methods of harvest. The complete award report list can be found here.
https://babel.hathitrust.org/cgi/pt?id= ... up&seq=663
Last edited by jeffkn1 on 03/05/20 14:21, edited 1 time in total.
Top

Jeff,
With regard to your final entry about Mrs. J. H. Slack in New Jersey. the following link is to an AMFF journal article, Hunting Dr. Slack: American Fish Culture's Forgotten Man.
Charlie

Here's the freshwater fishing and angling group from the fisheries building (pg 1022): Here's the half dollar minted for the exposition Here's the cover of the Rand Chicago Atlas with very limited details on the exposition: The 1000+ page official directory is hard to find details on displays. Obviously it doesn't include everything that was in the fisheries building over 55000 sq ft, but it seems to lack a lot of detail. The Orvis display is not mentioned, yet Samuel Howarth from Florrisant CO is published? I can't find Montague, but as Rex E documents they were there.
This picture shows the fisheries floor and the Orvis display (top of lower third, slightly to the right of center, just to the right of the middle post) Here's the Orvis display at AMFF, it's an oak post (hex)with upper and lower leaves around it with pictures and flies from areas all over the United States. Here are some pictures and flies in the display, again at the AMFF There was an 1884 Cotton Centennial Expo in Nawlins. Have you checked to see if any Vermonters were there?

I did spend some time on the Smithsonian search engine (16 million items cataloged) and didn't get a lot of satisfaction. The search engine leaves a lot to be desired.

When I look at a good sized expo like the Chicago 93, I expect everyone would have a similar interest in the angling tools and tackle and come to find out they don't !

roycestearns wrote:Jeff,
I haven't check in on the 1884 expo, but I will do that.

I did spend some time on the Smithsonian search engine (16 million items cataloged) and didn't get a lot of satisfaction. The search engine leaves a lot to be desired.

When I look at a good sized expo like the Chicago 93, I expect everyone would have a similar interest in the angling tools and tackle and come to find out they don't !

Love the fly presentations! Sad but true on your last comment. Next trip East maybe you can see Jerry's Gold Kosmic, displayed at the Columbian.
Top

Sometimes I wonder how these things work.
Three days I go I noted

was noted in the "Official" 1893 Expo directory and C F Orvis was not. About 10 years ago I researched Samuel Howarth and ended up in several dead ends. Yesterday I found some carded Howarth flies in Colorado, and they are on the way now. It appears Howarth participated in several expo's back to London in 83 and claims to have been in business since 64. Jeff Hatton, are you familar with Howarth of Florrisant and Colorado Springs? I'll post upon receipt.
Top

nope first I have heard of the man. looking forward to learning more about him and there was a reel maker from Paonia who is also one of those under the radar makers, I have seen one of his reels but it must have been run over with an orchard tractor because it was flat as a pancake. Very Sad.

P.S. does anyone else have a copy of the book titled "Columbian Edition, The Sportsman's Directory and Yearbook, 1893" Great little book that is devoted to the sports at the Columbian Exhibition. I will use it in the documentary on the GTRS, it has some very neat stuff in it.

The list of rod makers in this book shows ;

I believe this list is also incomplete but does add to the discussion. There are some almost unknown names there, anyone seen a rod by C.M. Smyth ?
Top 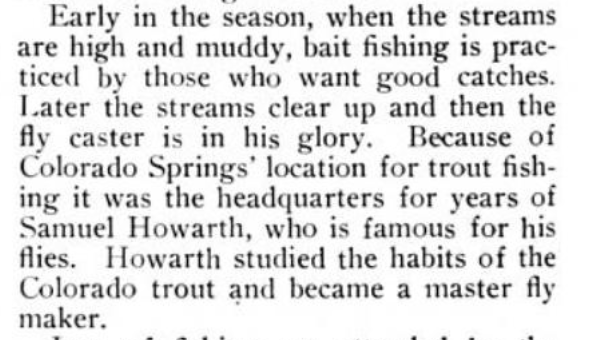 Charlie, Thanks, I found It pays to re research ... so much has been digitized just in the last 5 years. I found several of his letters in Field and Stream and additional biography. It turns out that there's a fairly famous Howarth in Colorado, and similar ancestry from the old country but haven't tied them together. Samuel Howarth claims to have brought the eyed hook to America (doubt it) in the Sept 1917 Forest & Stream.

brought Mr Hall's (1884) eyed hooks to America in 1889 First American Angler to use eyed hooks was Mr Waltemeyer, an Engineer on the Colorado Midland railroad.

does anyone else have a copy of the book titled "Columbian Edition, The Sportsman's Directory and Yearbook, 1893" Great little book that is devoted to the sports at the Columbian Exhibition.

Thanks I'll be looking for it.
Excellent list.
Top

I think the book Jeff refers to may be available online. 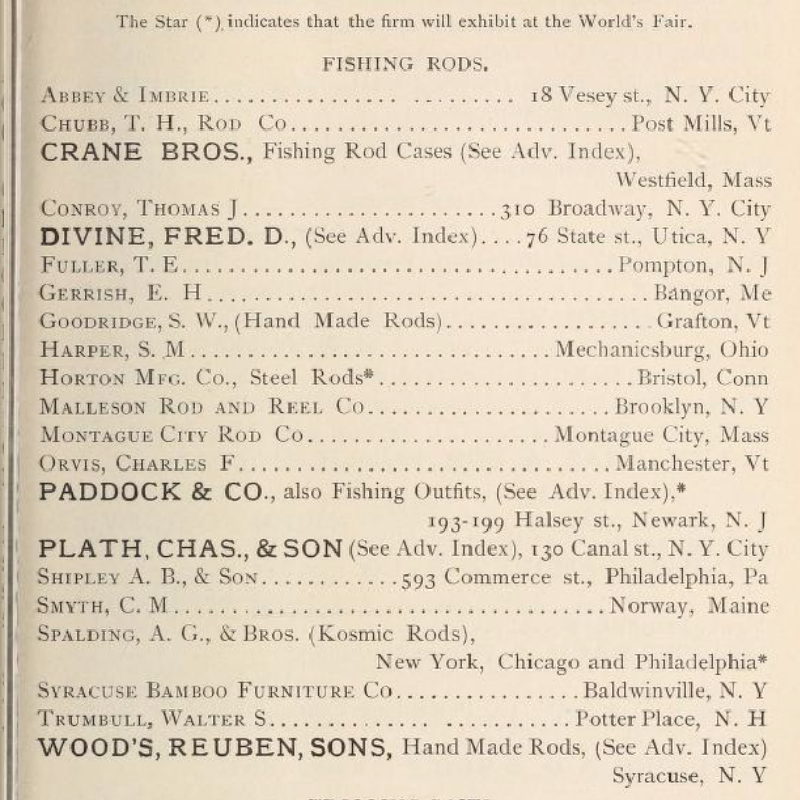 Oh that's good. Gerrish canoes or a Leonard like rod? Trumbull and Goodridge ! Have we ever seen a Reuben Woods rod?
Top

Gerrish was advertised as a rod maker. Bet he would have had canoes there as well but that is just a WAG

How about the 1882 Fisheries exhibition in Edinburgh??? I know that Conroy & Bissett where awarded a silver medal for their rods at that Fair/exposition, does anyone else have more info about that one???
Top

1882 - good question Jeff.
Can you imagine traveling to Edinburgh for an expo as a small company in 1882?
Two months just to travel round trip!
No calls home ... maybe a dit dot dit but that's it!
Top

Information about the 1884 Cotton Centennial is a bit sparse. I am aware that Wheeler exhibited with Maine products rather than with other tackle makers like they all had 8 years before in the Centennial Expo. Don't know what other rod makers showed. But the big story to come out of the debacle, one that has nothing to do with fishing tackle, was that of Edward A. Burke, the onetime Treasurer of the State of Louisiana who ended up head of the Cotton Centennial. It's a story worth a Hollywood effort. Not sure who to cast as Burke. 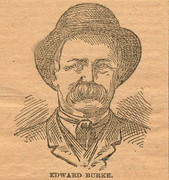