A case for C&R

This board is for discussing concerns of fishing bamboo fly rods. Examples would be, lines, actions, classic and modern makers actions and the like.

A case for C&R

I just returned from a Northern WI / UP trip. I hit one of my favorite streams where last year I caught a monster (for a stream I could jump across) 13+ inch brookie. I released her carefully and in a video I took she takes off with lots of energy.

This year I returned to the same spot and managed to catch the same fish. I suspected it was the same based on size/location and confirmed by comparing the markings. This year she was about 14.5 inches.

I was frankly amazed to catch her again; the area is not a hotspot for Catch & Release. I am a firm believer especially since some of my favorite haunts are smaller water where killing fish would have a noticeable affect on the population.

I released her carefully and hope for another encounter next year! You can kind of tell from the photo I'm wearing the same shirt (not too surprising, it's Permethrin treated and this is a tick infested area). I will make sure to wear it next time I visit. 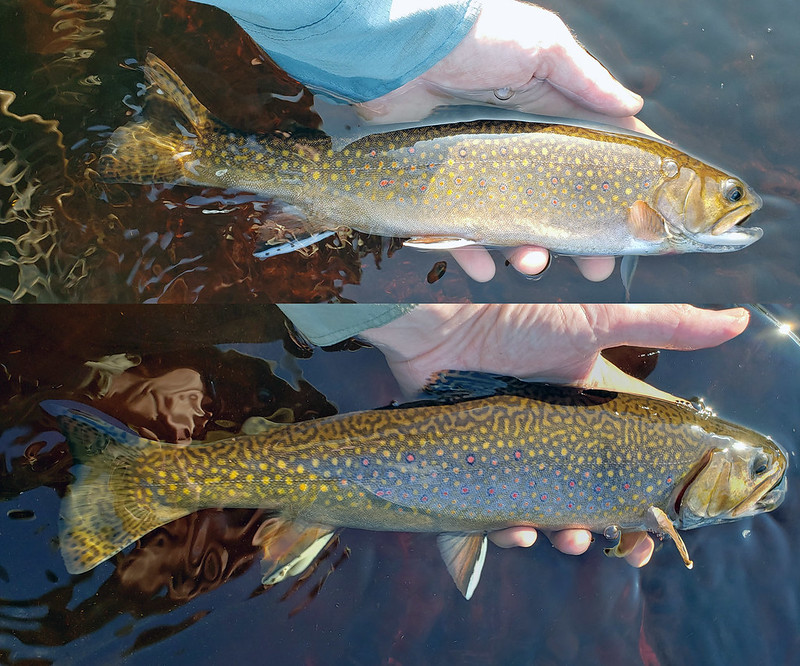 Very much so Tim. Also important in C&R are barbless hooks, knotless nets, trying to avoid out of the water photographs and not under-gunning when it comes to choice of rod. That will help ensure the future of our sport.
Last edited by PT48 on 06/29/20 03:44, edited 1 time in total.
Top

Very nice, and I have had the same experience.
Top

Wonderful report. Which fly did you use? Was it the same pattern each year? Best of luck in this location next year.
Top

That is a beautiful small stream fish. She looks healthy in both pictures, and she might be there next year.

Last year I caught the same 13" brookie three times, once each time I fished the stretch, each time with a different fly. I've only been back to that spot once this year, and I didn't see her. But in this stream the fish move up and downstream a great deal; in some streams the individual fish stay put.

Where people fish for the frying pan or the smoker, the best protection for a big fish is a healthy stream with a lot of fish. The biggest one is rarely the first fish in a pool to grab your bait or fly, and playing the little guys alerts Ms. Big that someone is afoot.
Top

Nice Brookie. Some of our small stream hold some very nice fish up here and C&R is the way to keep it that way. Thank you.
Top

I fished a tiny local stream last week that has only tiny brookies, 7"+/-. Caught some every pool and it was all great, but the water was a trickle in the drought and I realized I couldn't bring myself to continue terrorizing such already stressed trout. So I went beyond catch and release and just folded up shop and left, hoping they'd make it through the summer without any more interference. Your photos are inspiring and beautiful, and I hope you keep catching that fish. What a treasure.
Top

I used to get up to the U.P., though some of the waters I frequented are now running to warm for trout. But it's fishing at its purest. You get out on the real wild. No guides or chi-chi fly shops, few anglers. It's beautiful.
Top

That is one truly beautiful Brook Trout! Good for you TimM!
Top

Awesome! Always great to see the northern brookies in streams (not the ones stocked in the northern ponds), especially that size. Thanks!
JohnS

Selected harvest could work, but I don't often fish waters where there are "too many fish."
Top

Based on the limited data of that one fish, I'd say that the stream is not one where food is a limiting factor.
Top

perfesser wrote: ↑
06/29/20 20:56
i failed to indicate that my response was to the situation described by member cimarron. i agree the original poster's situation is far different. and enviable. i maintain that 'many small fish' can be too many small fish, and the fishery as a whole will often benefit from thinning.

With that clarification I could agree. I know some streams where the reproductive capacity of the fish will outstrip the food supply, and the many fish will be stunted.

Cimarron writes that he was fishing a tiny local creek, and he is writing from Northern New Mexico, where the brook trout could be feral but not native. In MN and WI where I fish, the brook trout are native in some streams, introduced and feral in others, and planted annually in a few. The size of the fish is affected by genetics. Some strains just don't seem to get as big as others. Some strains die of old age earlier than others.

Some creeks just don't seem to be places to grow a big fish.

The smallest creeks I know are nursery streams for larger trout rivers. Except during spawning, they rarely have a brook trout over 7". Culling a few fish from these creeks won't help the size structure; the fish all drop down into the river by the time they reach 8".

I know a handful of small streams where fish like that of the OP will live and grow. That fish is special, and should be released so she has another chance to keep her genes in the pool.
Top

On catching the same fish again, I dug back in my emails with a WI fishery manager that I constantly ask questions and send feedback to. This is in reference to a very large trout I had caught and released.

"The real question anyway, is if you release a big fish this season, what are the odds someone else might also catch and enjoy it. I believe
those odds are pretty good. We don't have any data in real time but back in the 1980s and 90s when we ran regular creels those numbers suggested recapture rates of 2.5X. Anglers caught 2-3 more trout than the estimates said were present in the stream. Meaning that anglers either lied prodigiously about their releases, or that each trout caught, released 2-3 times per season. Data from tagged trout suggested the latter."

The other part of this comments dealt with the life expectancy of the trout in this particular river. Two fishery managers guessed it would be 7-10 years max. in this river. So the 23" trout I had released they guessed was probably near the end of its life. It would be interesting to know how old TimM's 14-1/2" brook trout is.
JohnS

PT48 wrote: ↑
06/28/20 23:00
Very much so Tim. Also important in C&R are barbless hooks, knotless nets, trying to avoid out of the water photographs and not under-gunning when it comes to choice of rod. That will help ensure the future of our sport.

Yes, total agreement. Imo, our photo centered society has spawned a definite threat with fish pictures. Even at the most careful and speedy, this practice has to increase the mortality rate. Striking to me is the present "fashion" to pose each brookie in one's hand as part of a "cool" photo essay. Very prevalent within some sites. You have to get the pose just right...
Top

Great fish! It’s fun to compare the markings and realize it’s the same fish. Nice photos and great to see the fish in the water. I remember reading a fly fishing magazine years ago where they were able to identify a New Zealand (I think) brown trout that had been caught by several anglers, several years in a row. Most rivers are fished so hard anymore, if not for C&R, they’d be fished out pretty quick.

Both times on a caddis fly but different patterns. If memory serves first time was an X-caddis and second was an elk hair caddis.


Both times I arrived at the golden hour when the shadows were lengthening and wind had subsided and plenty of active insects. Minutes before catching that fish I caught another nice brookie in the 11-12 inch range and afterward caught several other 10-12 inch fish just upstream. I fished the end of the section with an hour of daylight to spare. Normally I'd hike to another spot but for once I felt like I'd done everything right. It was a memorable night for sure.

I do a lot of photography but most of my fish pics kinda suck. Someday we'll have photo drones that follow us around to automatically take video and pictures and scout ahead for steaming bear poo.
Top
Post Reply
21 posts