This board is for discussing concerns of fishing bamboo fly rods. Examples would be, lines, actions, classic and modern makers actions and the like.

Three rainbows, each about 5 pounds (estimated). The first was a steelhead on the Deschutes, caught while fishing dry flies for the resident redsides rainbows with my 8’ 6-wt Farlow. The fish took with a toilet-flush rise and put up quite a battle. At 24”, that was the largest trout I ever caught for many years.

I caught the other two, both about 22”, this August on the North St. Vrain, fishing nymphs with my 7’ 8” 5-wt Walton Powell. These fish were on a private section where the owner feeds the fish mice he traps in the crawl space of his house. Cheating a little bit, maybe, but they sure were fun. And the little rod handled them with aplomb.
Ad piscatoribus sunt omnes res secundi.
Top

He who shall not be able to make a trout fly, after studying these diagrams and directions, must be deficient either in brains or in manual dexterity. : Edward Fitzgibbon 1853
Top

A grilse of about 5 lbs. in the Stewiacke, back when you could fish the Bay of Fundy rivers. On an 8½' FET Browntone Streamer. My buddy fished his then new T&T 8½' Grilse cane rod; we both preferred the Streamer. I must confess that I normally fish graphite for salmon. The Streamer is a great rod for smaller rivers and grilse, but I wouldn't want to tangle with a big salmon with it.
Top

Just the baddest: Amazon River piranha on an E.C. Powell 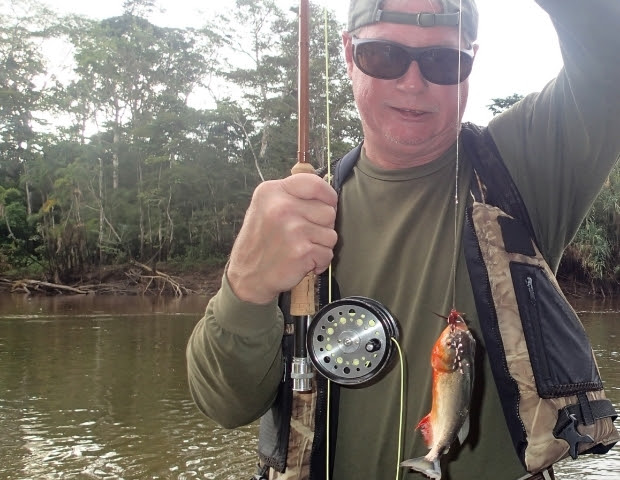 On Easter Sunday morning a few years ago, I hooked a fish on the San Juan below the dam. I knew it was good size, but when I finally netted it, I spontaneously exclaimed "Jesus!" because it was about 23" +/- in the markings in the net. Definitely the biggest trout I've caught there and I always refer to it as the Jesus fish making its Easter appearance. Maybe it proves the book's point that there is no clear distinction between religion and fly fishing.
Top

Bill Terry wrote: ↑
11/24/21 09:49
I caught the other two, both about 22”, this August on the North St. Vrain, fishing nymphs with my 7’ 8” 5-wt Walton Powell. These fish were on a private section where the owner feeds the fish mice he traps in the crawl space of his house. Cheating a little bit, maybe, but they sure were fun. And the little rod handled them with aplomb.

OK that's a great story ;-)
I trap the squirrels that attack my bird feeder, don't know of any local pike/big browns I could feed them to though, sadly..

my biggest fish on cane are much smaller than all the torpedos in this thread.. 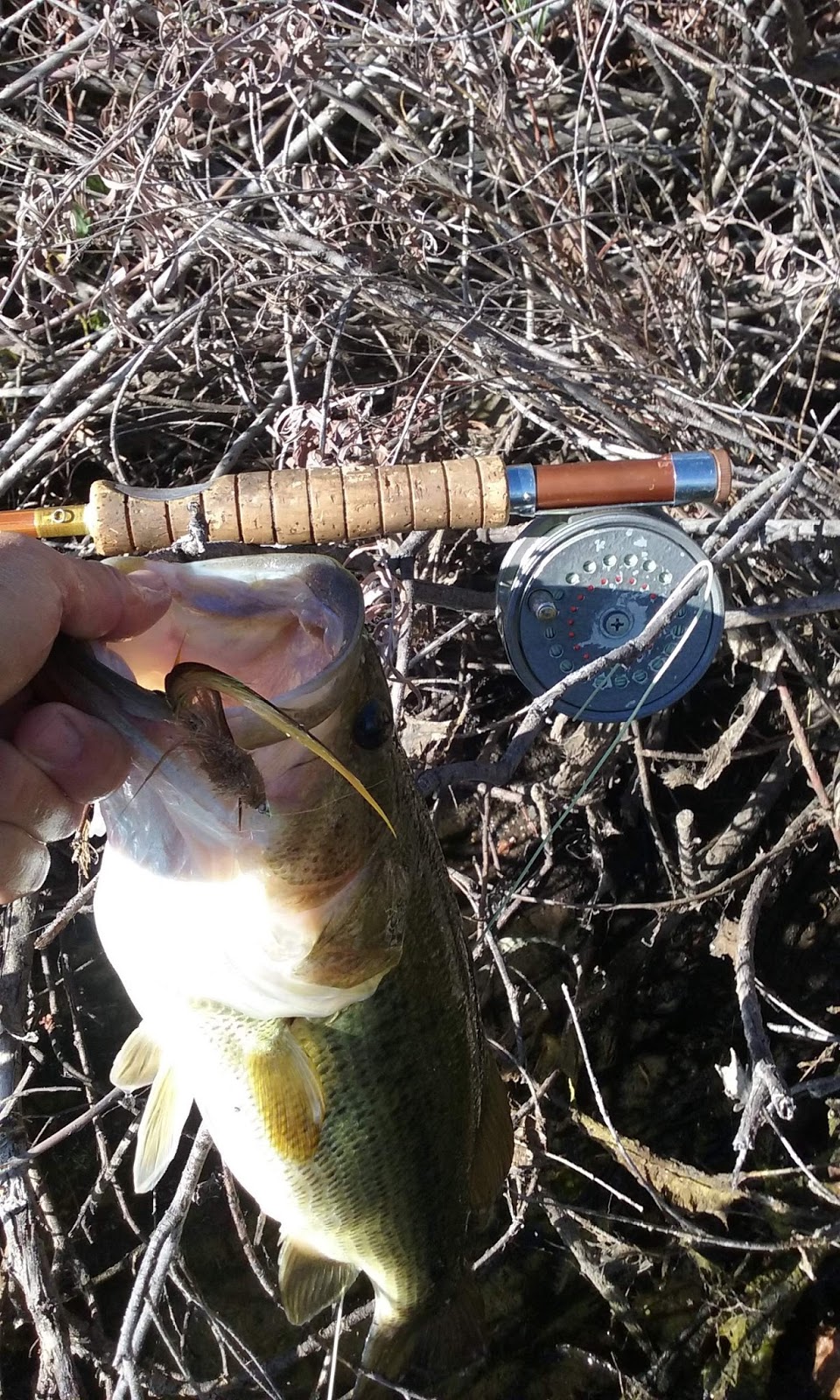 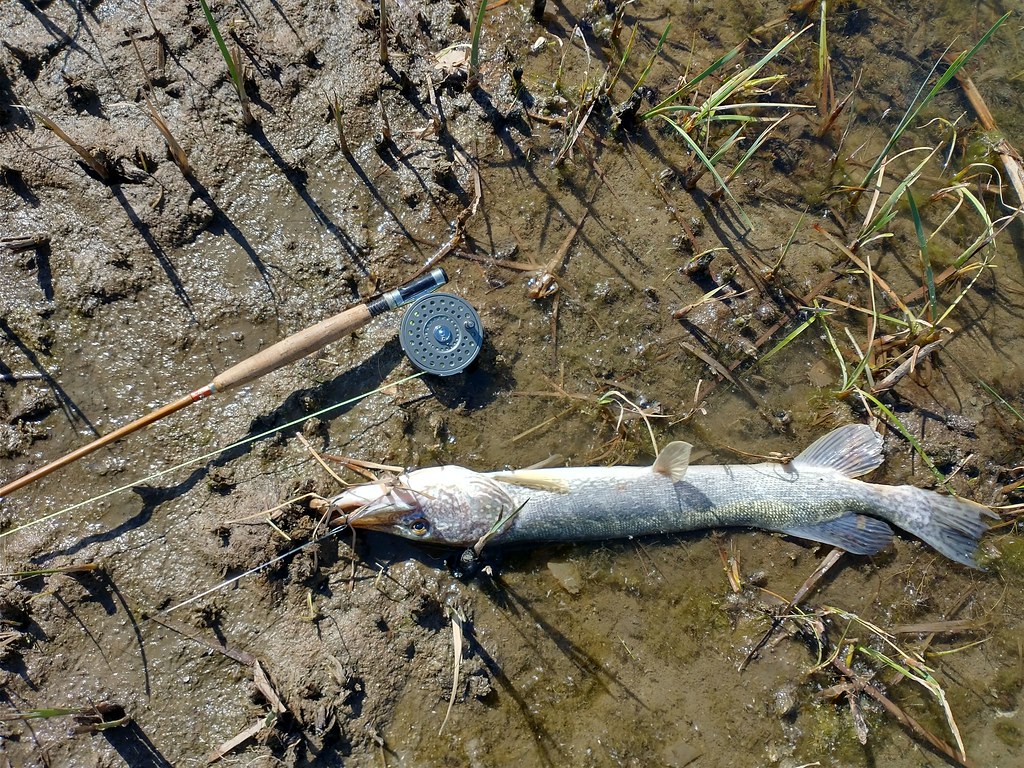 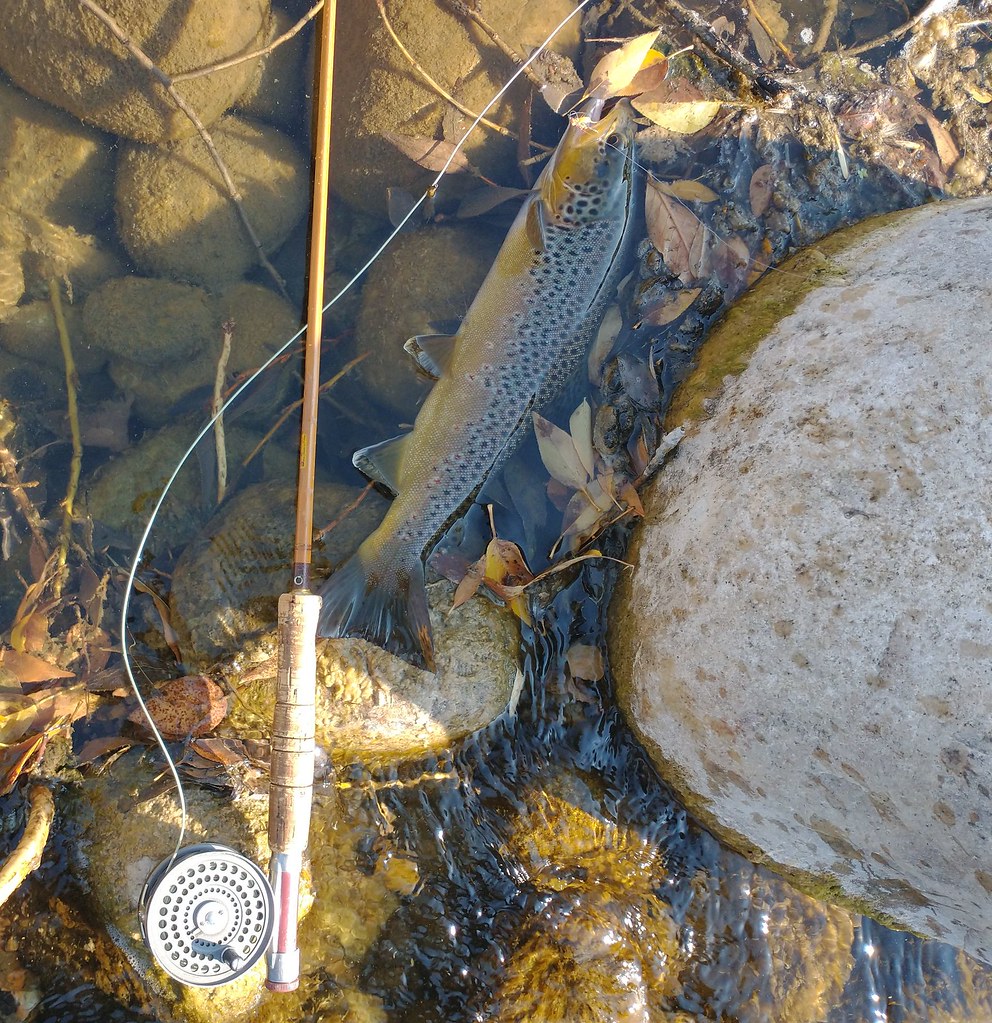 Wow! That’s a hell of a fish. Nice job
“Testimony is like an arrow shot from a long-bow; the force of it depends on the strength of the hand that draws it. Argument is like an arrow from a cross-bow, which has equal force though shot by a child.” Bacon.
Top

Gosh guys, have to remind you I only got into bamboo late in life. Sorry to say my biggest fish was a brown out of the White that was a nice fish but would not have made 18", probably a bit past 16". Was a lot of fun on a 3wt Jeff Hatton Penta rod though. Big fish in the past were on plastic rods so they're great memories but not for this site.
Top

King salmon (jack approx. 10 lbs.) caught on an 8'6" Orvis Shooting Star. He was quite tasty after being smoked.

Mine's not that big but its wild and came from a creek I can jump across, scared me cause it was completely unexpected. Pretty cool for Dirty Jersey. Taken on a Recker 4wt.

Last summer I caught six of these big boys (common carp) on my version of the Payne 400. 9 wt, hollowed. The biggest was 18 lbs. I was on the Shenandoah River guided by William Heresniak of Eastern Trophies during the height of the cicada Brood X hatch. 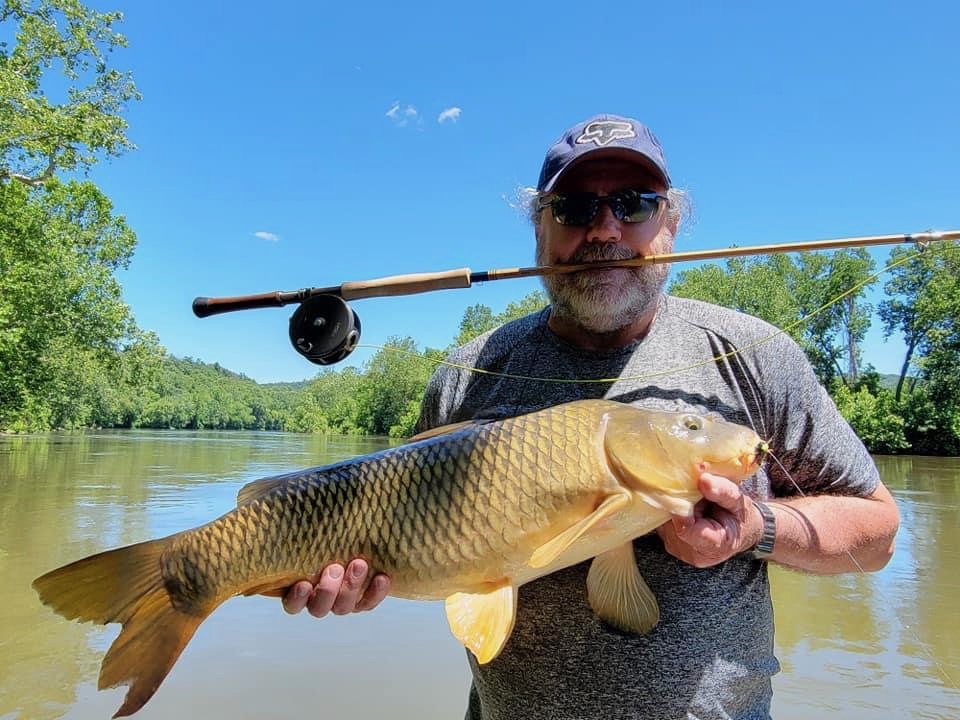 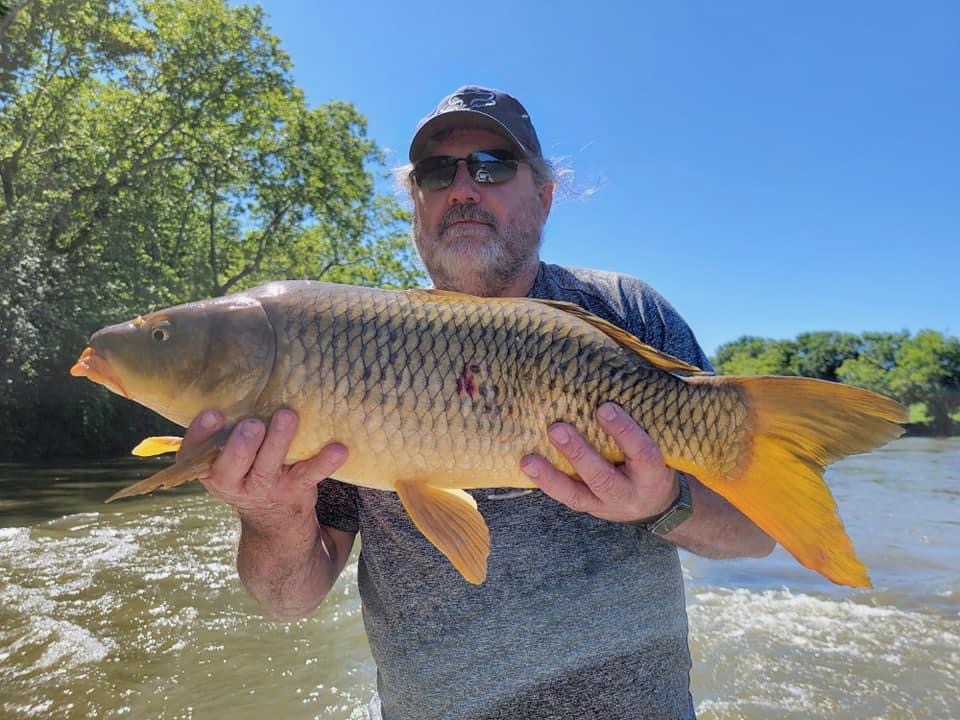 ...as for us we pin our faith and fealty to the silk-wound hexagonal rod cunningly yet simply devised of its six subtle, individual triangular strips of cane throughout...

Chris, those carp are tremendous! That’s some enviable fishing on surface flies, I’m sure they were very powerful. Great rod for such fish, and even from your own hands. Outstanding!

Btw, did you hook up with any smallmouth one the cicada’s on that outing also?
Top

Adrien, yes, a few smallies also came up for the show, but no big ones.
...as for us we pin our faith and fealty to the silk-wound hexagonal rod cunningly yet simply devised of its six subtle, individual triangular strips of cane throughout...

While the Chinook is the largest pacific salmon, the Chum wrecks more fishing gear (baddest).

No me, but a friend of mine (who visits these pages..) managed a 110lb marlin in Costa Rica a few years ago, on a double built bamboo fly rod, of his own making..

That’s amazing…. Not many people fishing for marlin with bamboo these days! It’s funny but at one time it was the latest and greatest fly rod material and lots of world records were set with it.

Do you know what length the rod was and what line weight it was? It would be interesting to know the whole story
“Testimony is like an arrow shot from a long-bow; the force of it depends on the strength of the hand that draws it. Argument is like an arrow from a cross-bow, which has equal force though shot by a child.” Bacon.
Top

Do you know what length the rod was and what line weight it was? It would be interesting to know the whole story

I agree. Some personal thoughts having bill fished in latin america for over 3 decades

1. Sailfish and Marlin usually are brought close to the boat by trolling gaudy teasers with no hooks. A long cast may not have been required
2. A hookup takes place in both horizontal and vertical spaces
a. Horizontal: With conventional gear, marlin are usually 'pumped' towards the boat. Raise tip, drop tip and quickly reel in slack. Repeat. This required a rod with some back bone. However, skippers have the ability to pick up line by backing down on the fish. Can eliminate allot of pumps.
b. Vertical: You can't back down on a fish if it goes deep. It needs to be pumped towards the surface. A rod with backbone is important.
Tuna and Black Marlin will sounds. Seems like most other billfish species fight in the horizontal space though I am not an expert.
3. I have fished for 150lb+ tarpon with graphite fly rods. Used a 12 wt and felt a 14 wt would not be over kill. Know people who fished sails in Guatemala and used a 14wt
4. Allot of people break graphite rods playing large fish by high sticking the fish when it's deep, close to the boat, or by moving their hands off the cork higher on the blank for leverage. Bamboo might be more tolerant of user errors
5. Most people don't realize how important a skipper's boat management is to landing a billfish
6. I have brought 12 wts on board when I have gone marlin fishing. Generally don't see enough marlin to have a shot with it. I have been lucky enough to experience schools of striped marlin schooling over bait in the Cabo area (Gordo Banks near San Jose Del Cabo and the Golden Gate Banks NE of Cabo). A zoo with the number of concentrated boats pitching live baits to cruising fish. Did not have a fly rod with me but wished I had Really should go with a boat that has a strong history fly fishing for bill fish.
7. a 100 lb fish is a big fish on a fly rod, but actually small for Pacific Sailfish, Striped, Blue, Black Marlin. Atlantic Sailfish and White Marlin tend to be smaller

Good and rare accomplishment by your friend. Really sounds like an interesting story.
Top

Last weekend of the 2020 Wisconsin inland trout season, plethora of creek chubs that were challenging the brookies in size and aggressiveness attacking the fly -- and that's where the fun ended. Caught on a Perfectionist clone, this one may have actually put up more resistance than bringing in a wad of weeds....but you know how memories get exaggerated over time. 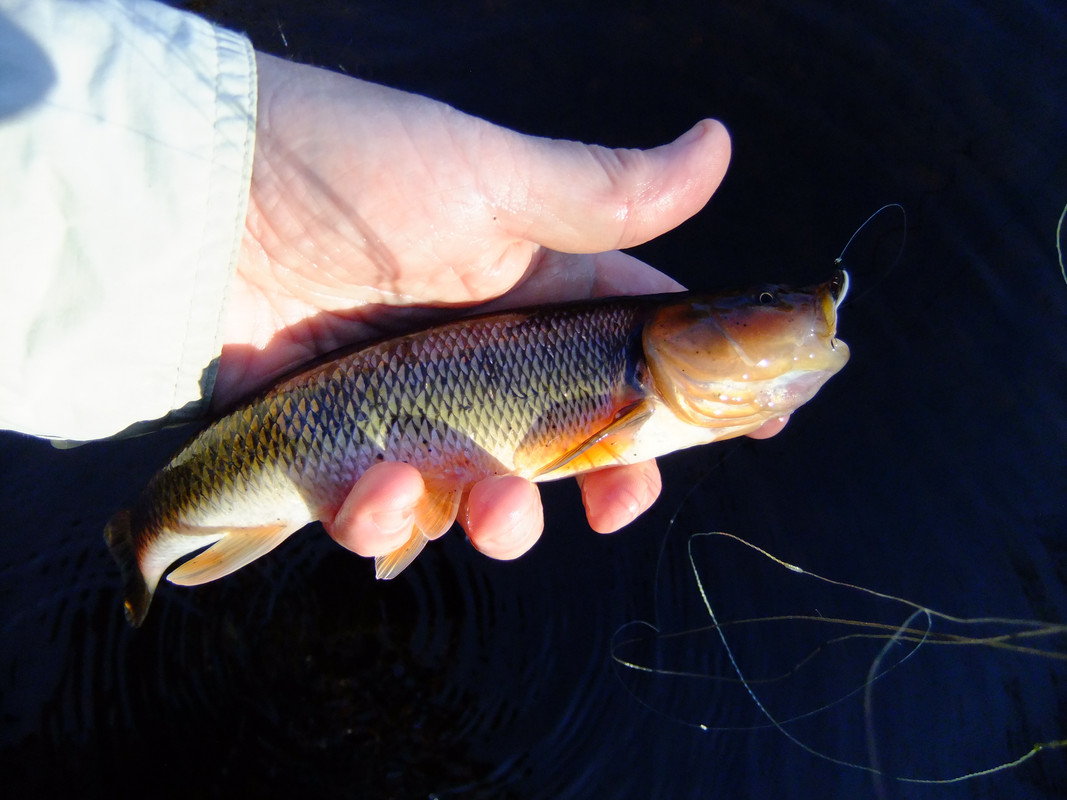